The old adage: “Get back in the saddle” has never been so true for Carol. She simply loves riding horses. It’s a good thing because horseback riding actually helped diagnose her hip pain. 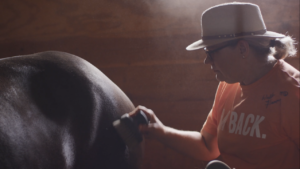 Carol explains, “I first experienced right hip pain in early June, 2016. It began as a slight twinge when I dismounted my horse, then lingered the rest of the day. The next day it was gone, only to return the next time I rode. This pain worsened over several months, only occurring after riding. By December 2016, I actually had difficulty walking for an entire day after a ride. By spring 2017, mounting and dismounting was nearly impossible, and I was unable to maintain the leg position required to participate in my chosen sport, Dressage. Failing conservative therapy (ice, NSAIDS), and an alternative therapy (Muscle Activation Technique), it was time for a consultation with an orthopedic surgeon, or stop riding horses.”

Carol’s search for someone to help her was complicated, if not frustrating. To be in so much pain with the fear of losing the opportunity to do what she loved was worrisome.

“The first orthopedic surgeon I saw diagnosed my severe right hip arthritis and recommended a total hip replacement,” said Carol. “I was quite interested in the anterior approach to total hip replacement, one he did not perform. I scheduled a consult with an orthopedist in Madison to further investigate this, only to find out a week before the appointment he was not a covered provider in my insurance plan. The same day on Facebook, Dr. Flannery was introduced as a new provider at OSMS, one familiar with the anterior approach.” 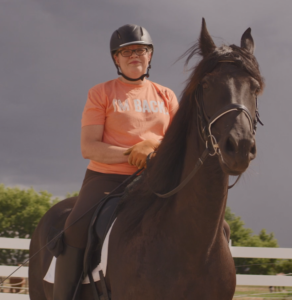 “I wanted to go with the anterior hip replacement procedure because I needed to get back to life,” Carol says. “I think the anterior approach has fewer potential complications and much less down time. My consult with Dr. Flannery went very well. Surgery was scheduled for October 10, 2017. It was performed at the Orthopedic Surgery Center of Green Bay inside the OSMS clinic in Green Bay. I was up and walking unassisted by the nursing staff the night of the surgery and released the next morning.”

Carol continues, “I am back to life and riding! I was back to work only three weeks after surgery, and back to riding two months after the surgery. The first time I mounted my horse I was actually afraid to; the pain I had been experiencing had been that bad. I stood by my mare’s side for several minutes summoning the courage to mount. When I did, there was no pain and there continues to be no pain!”

Carol is back thanks to Dr. Flannery and OSMS!