Traveling the world and feeling the waves crash beneath his kiteboard is one of the best feelings for Mike. But when his knees started to hurt and the things he loved most became difficult, his only thought was, “How far can I walk without having to stop, sit down, or use any pain medicine?” As a very active person, when even walking caused an abundance of knee pain, Mike knew something needed to be done. 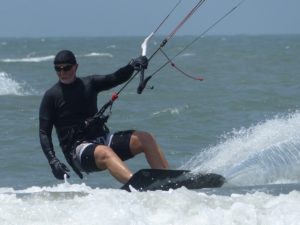 Two people in his hometown spoke very highly of OSMS. One of them, a high school football coach, had been sending players there for years. That’s when Mike decided his next move would be to see Dr. Tressler, an OSMS orthopedic surgeon.

“I had researched knee replacement surgery and OSMS” said Mike. “I felt confident I would get straight answers to my questions, and also get quality care.”

He was especially interested in what type of knee replacement Dr. Tressler did, what material would be used, and what the recovery would look like. After discussing all the possibilities, they decided that a bilateral knee replacement (replacing both knees at the same time) was the best solution for Mike. Mike believed in “going in strong and coming out strong,” so he decided to have surgery right away so he could get back to the life he loved and missed. 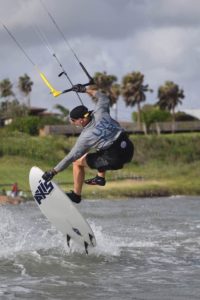 Mike was looking forward to getting in and out of the water again without pain, as well as exploring new places without having to stop and sit due to pain. Mike admits the surgery was intense, but after six weeks including a month of rehab, Mike felt good.

Before Mike’s knee replacement surgery the question he asked himself was “how far am I going to make it today without having to stop or use any pain medicine?” After surgery and recovery, this question no longer crosses his mind.

Three and a half months later, Mike realized his “I’m back” moment when he got on his kiteboard for the first time since his surgery. Mike can now have 3-4 hours a day of aggressive kiteboarding sessions with no pain. He is also able to enjoy walking around as he travels the world.

For anyone thinking of having knee replacement surgery, Mike recommends going in strong, be proactive, and don’t wait to have the procedure done.

Welcome back to the life you love, Mike!