Sandy’s Story: Building Strength, Restoring Range of Motion and Getting Back to Life!

When Sandy went in for her first physical therapy appointment on Friday, January 8 (the day after her ACL surgery) she had one main goal – to get her right knee back to full function.

To do this quickly, safely and to ensure a long-term, successful recovery, Sandy worked with her physical therapist to establish a therapy plan and six progressive therapy goals.

After a lot of pain and struggling that first day, Sandy went home for the weekend and worried if things were ever going to get better.

On post-op day four, Sandy had 92 degrees of flexion, and she began doing exercises to strengthen her lower body muscles. These included hamstring curls on an exercise ball and straight leg raises. By day six, her flexion moved up to 100 degrees and her extension only had 5 degrees of bend.

“It was at this point that my knee really started to feel better, and I could tell my quad muscles were coming back,” Sandy says. “And on day 8, I got to say ‘goodbye crutches!'”

As week two of physical therapy began, Sandy met her first therapy goal; she was able to fully extend her knee to 0 degrees and her flexion reached 110 degrees. In fact, Sandy’s range of motion had improved enough to start using the bike.

Sandy’s right leg was now also weight-bearing, and she could walk unassisted while wearing her brace. This meant she successfully achieved goal #2. By post-op day 11, Sandy was cleared to return to work, and after day 13, she was completely off pain medication and able to drive again.

During weeks 3-6 of therapy, Sandy added more weight bearing and balance exercises to her routine. Her leg was also freed from its brace! And she met her goal of 135 degrees of flexion, ahead of schedule. 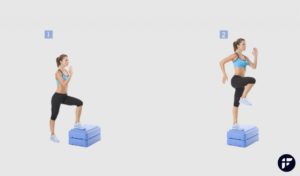 “At my appointment on February 24, I told the therapist I felt ready to start working out at the gym again, and on February 29 I resumed my fitness center membership!” Sandy says. “I was limited to the bike, elliptical and walking on the treadmill, but it was a big step toward rebuilding my cardio endurance.”

At this point in her therapy plan, Sandy also saw significant improvements in her quad, hamstring and glute muscles. She was doing leg presses with 80 pounds and hamstring curls with 35 pounds.

By March 9 (63 days after her surgery), Sandy restored her full range of motion. At the beginning of April, she bumped up her leg press weight to 200 pounds and her hamstring curls up to 50 pounds.

Sandy has come a long way since that first appointment – where she could barely bend her knee – but there is still some work to do. Pivoting, jumping and running are still challenges she needs to overcome.

“I’ll consider my knee back to full function when I’m back at my kickboxing classes every week,” Sandy says. “That’s my seventh and final goal, and I hope to achieve it by July!”