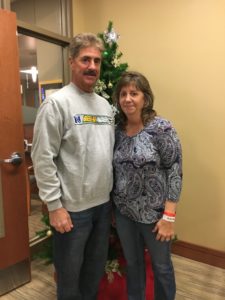 Athena and Mike Francis have both suffered from chronic joint pain that interferes with work, daily activities, exercising, and enjoying life. Mike’s started with his hip. About a year ago he decided to have surgery on it, hoping he could get back to living life the way he wanted. The orthopedic surgeon he chose was OSMS physician, Dr. William Enright.

“A friend of ours had a hip surgery with Dr. Enright a few years prior, and she was very happy with the outcome,” Athena says. “So when it was time for Mike’s surgery, she highly recommended him.”

As they went through Mike’s hip surgery, Athena was still living with finger pain. So at one of Mike’s follow-up appointments, she mentioned her pain to Dr. Enright. He referred her to the OSMS hand surgeon, Dr. Ben Zellner.

“I scheduled a consult with Dr. Zellner, and when I left the appointment I felt very confident having him do my finger surgery,” Athena says.

Mike was also very satisfied with the results of his hip surgery, so he wanted Dr. Enright to repair a torn meniscus in his knee.

This meant the Francis family had two more procedures to coordinate into their full-time work schedules. Plus, they would be traveling to Green Bay from Iron Mountain, MI (an almost two-hour drive). For these reasons, they thought they’d see if both surgeries could be scheduled on the same day.

Dr. Enright and Dr. Zellner, along with their nurses and the OSMS scheduling staff, coordinated schedules to make it happen. In December 2016, Athena and Mike made one trip to Green Bay and had both surgeries performed at the Orthopedic Surgery Center of Green Bay in one day.

“We were so pleased that it worked out! It was nice to cut down on the travel, especially in the winter months and around the holidays,”Mike says.

“We made the right choice selecting OSMS,” says Athena. “Not only did we have brilliant surgeons that provided excellent care, but everyone at the clinic and the surgery center made our experience a truly positive one.”