Savanna has been an athlete her entire life. From running around with her kids on the playground to smashing tennis balls to chasing down soccer balls, Savanna loves to move. So, when she injured her knee, it was particularly hard on her. 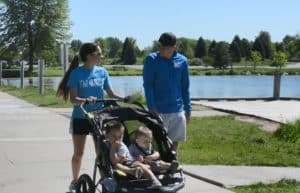 “I was playing in an indoor soccer league. I was sprinting towards the ball and when I moved to the left and planted my foot, I heard several popping sounds.” She knew right away it was probably an ACL injury because she had previously injured the ACL in her right knee.

“It was pretty bad. I went to the ER that night.” The doctors at the ER confirmed Savanna’s fear – it was a pretty bad injury. So, they recommended she go to OSMS to see an orthopedic doctor. Savanna says, “I looked up OSMS as soon as I got home that night because I was pretty upset. Dr. McCormick was one of the first doctors I read about on the OSMS website, and he had great reviews.”

Savanna could really relate to what the reviews were saying. “They said he worked with men and women of all ages, and that he worked really well with athletes who wanted to get back to where they were. I appreciated the athletic part of it because I’m an active mom. I had a family to take care of, so I was frustrated and discouraged to be hobbling around with my crutches.” 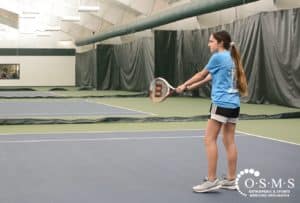 Discouragement quickly switched to encouragement, though. Dr. McCormick explained the technique options available to repair Savanna’s ACL. He also assured her she would get back to chasing the tennis balls, soccer balls, and most importantly, her kids again.

Savanna says, “After talking with the doctor and going over the severity of the injury and the options to fix it, we decided to go with a Quad Graft. He said he had a lot of success with people bouncing back faster and feeling like there’s less pain with recovery with that technique.

Savanna was definitely not happy that her ACL was torn and that it needed surgery, but she knew she was in the best of hands with OSMS. She says, “Before I left my appointment, we had the surgery scheduled. And I’m back, thanks to OSMS.”