As a Green Bay police officer and former member of the S.W.A.T. team, not much surprises Jon. But when he found out he needed to have a hip replacement, it threw him a bit. “When I heard I needed to get my hip replaced, initially I was surprised. I didn’t think that my hip was to the point where it was. I walked in there thinking they would look at it and I would get some sort of rehabilitation program, and maybe down the road be looking at a hip replacement. But they told me ‘you need a hip replacement, and it needs to happen sooner rather than later.’”

Jon’s job in particular is no place for hip issues. Not only does his profession require a lot of movement, it requires that movement to be swift and deliberate. He needs to be able to go at any time, for as long as he can, as fast as he can. 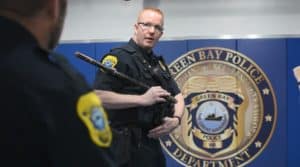 Jon noticed his hip pain while working off-duty security for a professional football team. “We would have to stand around for seven, eight, nine, ten hours at a time. It was really tough to take. The pain was almost unbearable.”

Jon went to physical therapy, thinking that would help alleviate the pain. But his knee was far too damaged. My therapist said, “You’re going to need to get that checked out because your left hip is degraded to the point where it simply can’t be fixed with therapy.” His therapist recommended he go to OSMS.

It was there that Dr. Walker Flannery broke the news to Jon about needing a new hip. “What Dr. Flannery discovered was that it was bone on bone. It was all arthritic and that’s what was causing me the pain.” Dr. Flannery suggested anterior hip replacement surgery. 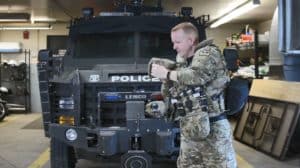 Dr. Flannery assured Jon that he would indeed be able to return to the activities he loves and fulfill the demands of his job.

“Having the surgery at OSMS gave me a greater relief than if I had to have it done in a hospital. I just felt more at ease being at a smaller facility. The people there knew me, and they were more vested in my outcome than I think at a big hospital, where nobody knows you, would be.”

One more surprise awaited Jon; the post-surgery recovery time. He was able to get back on the beat and pounding the streets in no time. “I was surprised at how quickly my turnaround time was. That is in no small part to the staff at OSMS and the physical therapy I received on site. I’m able to sit, stand, wear my gear and do my job without pain.”