Theresa will always remember July 8, 2014 at 8:30 pm. She was halfway through her first season of working at a summer camp when a game of Great Escape almost changed her life.

“I remember exactly how it happened, how I felt, and how the campers were looking at me when they realized what had happened,” Theresa says.

Looking back, she remembers thinking that it wasn’t too bad as she was taken to the hospital. Theresa says, “I thought they would set the bone, put on a cast, and then send me back to camp.”

Unfortunately, that’s not what happened. The ER physician told Theresa she needed to see an orthopedic surgeon by the end of the week. Since she was up at camp, her mom helped research options, and they found OSMS.

Theresa met with Dr. Steve Schechinger, and he explained that she had a spiral fracture of her left radial head – the part of the radius bone just below the elbow. Due to the speed she was running and the direction of her fall, Theresa’s fracture was more significant than she had thought.

“At this point, I had so many thoughts racing through my head. I wanted to get back to camp and start working again as soon as possible. The other thing I was worried about was my track season. I was a hurdler on my college track team and had worked really hard the previous year to come back from a different injury. So I really didn’t want to miss any more training,” Theresa says.

Based on Theresa’s desire to get back to her same activity level, surgery was recommended. During the procedure, Dr. Schechinger had to use a plate and seven screws to piece back together all the splintered bone pieces. The initial prognosis for a full recovery was 6-9 months. At Theresa’s first follow up appointment, she and Dr. Schechinger put together a plan to get her back to camp and all of the other things that she loves. 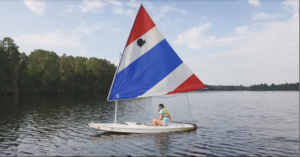 Theresa was able to recover much faster than expected. Six weeks after surgery, she was cleared to start running again, and she was able to compete on her track team through her senior year of college.

At six months post-surgery, Theresa had regained full range of motion, and she was able to have the hardware removed.

Theresa says, “Today, thanks to Dr. Schechinger and the OSMS team, I’ve worked four summers at two camps, and I’m doing all of the things I was scared I’d never do again after I broke my arm. I sometimes think about what my life would be like now if I hadn’t gone to OSMS, and to be honest, I’d probably still have a plate and 7 screws in my elbow, and I wouldn’t be able to do many of the activities that I love. But thanks to OSMS, I’m Back!”