When there is a fire or someone has been in an accident, Tom likes to be first on the scene to help. As a firefighter he is. That’s why not being able to jump on the fire truck and respond to a 911 call due to a knee injury didn’t sit well with him.

It was supposed to be just another day for this active firefighter. Tom was all set to hit the slopes for a day of downhill skiing, an activity he’s done many times before. Tom admits that the misty day probably wasn’t the best condition to ski in, but he took to the hill anyway.

It wasn’t even the questionable skiing weather that wreaked havoc on Tom’s knee that day. It was the ill-groomed hill. As Tom descended from the mountain and sped around a curve, he slammed into a pile of snow that had been left by the grooming machine.

“My right ski didn’t release when I hit the packed snow, and I tore up my knee pretty bad,” Tom says.

Tom toughed out the injury for quite awhile – several years, in fact – but after favoring the injured right knee for so long, the left knee starting to give him trouble. As a firefighter who works for a department that covers 180 miles, is up and down ladders, crawls through buildings, jumps on and off a fire truck, runs in and out of buildings, and carries a 40 pound air tank while doing it, he simply couldn’t gimp along any longer. He needed a knee replacement.

“I never was worried once,” says Tom regarding going to Orthopedic & Sports Medicine Specialists (OSMS) for care. “I’d go in there knowing I’d come out a different person.” He did. Dr. Grace got Tom back on the job in the best shape possible. 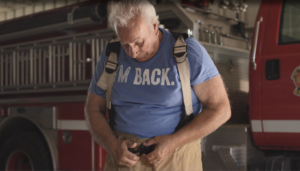 His first knee replacement gave him the stability, flexibility, movement, and motion he had been missing ever since the skiing accident. The pain subsided as well, so he no longer needed to favor the right knee anymore, nor did he limp around. In 2014, he had the second knee replaced.

“I knew it was time,” Tom said. Again, he relied on the expertise of Dr. Grace. The result of that second surgery was just as remarkable as the first. The knee pain was relieved, and stability, flexibility and motion returned.

“I couldn’t wait to get back to what I do, and it didn’t take long,” Tom says. “I know what it was like before the surgery; I was hobbling around. After the surgeries, I could do anything. I can still climb ladders. I go into burning houses at 71 years old. I’m able to do it with the best of them. I wouldn’t have that opportunity without the surgeries.”

The knee replacement surgeries, rehabilitation program, and after care Tom received from OSMS allowed him to continue his passion for helping people, contributing to his community, and doing whatever it takes to keep people safe.

“Without OSMS I believe I’d be crippled. Without OSMS, I wouldn’t be out there to help people,” Tom says. That’s my best and greatest gratification…that I am able to do it. I’m back to the life I love!”