Linda shares her I’m Back story.

“I remember seeing my great grandmother with ace bandages wrapped around her knees and my grandmother having knee surgery. My aunt on the other side of the family had both knees replaced, one of them twice. So knees are a problem for my family, and mine are no exception.

Over the last 20 years my knees have been at various levels of sore, painful, and swollen. One day I decided to run just a little on the track. That’s when the first torn meniscus happened. I could not take a full step and movement was slow and very painful. My primary care doctor referred me to Dr. Linehan at OSMS, and he ended up performing my first knee surgery – an arthroscopic procedure on my left knee – in February 2014.

A year later, the right knee (which had bothered me the most and for the longest) became worse thanks to another torn meniscus. I had said for a long time that I would go straight to replacement on that one, but decided to try the arthroscopic route since it was so successful in my left knee. Both times my care at OSMS was outstanding, and Dr. Linehan kept us advised of all that was going on. I hoped I was good to go.

Unfortunately, Dr.Linehan found a lot of damage when he did the arthroscopic surgery on my right knee. Six months later I was asking him for the replacement. OSMS suggested that I participate in the pre-surgery joint education program that teaches patients what to expect for both the surgery and once you return home. I found it very valuable, and I was able to go home after surgery feeling prepared. My physical therapy began two days after my procedure. The therapists worked with me and quickly got me walking without the walker a week after surgery. The physical therapy was so important, and I still do many of the exercises I learned! 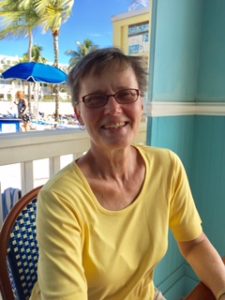 My original goal for after the total knee replacement was to be able to walk to the soccer field to see my grandsons play, but my daughter presented me with another. She had arranged a trip to Disney World for the fall and said she would rent a scooter for me to use for all of the walking that we’d be doing. That hurt – I did not want that scooter! I had six months to prepare, and I was determined the scooter was not going to be necessary. We went to Disney in late November, and I walked 21 miles in the four days we were there – no scooter required!

On February 23, 2017, I had a first birthday party for my new knee! Knee replacement is not an easy road, but I am so happy I did it. I am grateful for the wonderful care I received from Dr. Linehan and his nurse Katie. OSMS coordinated everything, making it possible for me to get moving again. Now I can walk to the soccer field, walk up and down stairs normally, walk in our neighborhood, at a walking track, or anywhere I want! I think I can officially say, ‘I’m back!'”